For the multi-million pound refurbishment of a Grade II listed theatre in Southampton, an intricate palette of Dulux Trade paint colours has been specified for the auditorium - with show-stopping results.

More than 1,000 litres of Dulux Trade paint has been applied across the refurbishment of the Mayflower Theatre, helping to transform the space from its 1980s paint scheme to a beautiful, intimate feel fit for 21st century use.

Part of the theatre’s 90th anniversary celebrations involved the £7.5m refurbishment and the repainting of the whole of the auditorium - the most high profile and talked about part of the project.

Specified by leading practice Foster Wilson Architects, Partner and Project Architect, Jonathan Size, explains how the theatre’s new paint scheme was developed: “The colour scheme has changed completely. When we took on the project, the auditorium featured a turquoise and pink-based scheme, but extensive research and detailed paint analysis revealed that the theatre’s original colour scheme was very different.

“Paint samples were taken from the theatre walls exposing several different colour schemes over the years including grey, cream, yellow and even a vivid pink scheme in the 1930s. We wanted to take it back to its original strong reds and recreate the glamour of the theatre’s 1920s heritage.”

Foster Wilson Architects arranged for samples to be taken away and came up with some 15 colours, which were handed to Dulux Trade. This is where the colour expertise of Dulux Trade came to the fore as Colour Consultant Nicola Holmes worked to pare down the original colour schedule to develop a palette of five different shades of red and burgundy, with a further three shades of gold and silver for highlights.

Additional specialist paint effects, including glazing and marbling, finished off the auditorium, while the front of house areas and staircases used a related colour scheme of a further four colours including the auditorium reds plus greys and creams with gold highlights.

Joe Ellis, Specification Development Manager for Dulux Trade, explains: “Once we had analysed the existing layers of paint and the decision was made to revert to the theatre’s original colour scheme, the matching of colours provided a glamorous and modern look.

“This atmosphere in a theatrical space has to be intimate and warm, to create the mood needed by performers and audience at each performance. We had to get it just right, particularly as we were changing the existing colour scheme, which everyone was used to.”

Principal contractor GF Holdings undertook the refurbishment work over a 12-week ‘dark’ period for the theatre during the quieter summer months, with the painting work completed by commercial painting contractor UK Decs Ltd.

Helping to avoid over specification and maintain budget, Dulux Trade supported the project throughout, particularly when it came to selecting the right products for the theatre environment.

The flakes were sent for analysis at an independent testing laboratory where the results showed that only the staircases would require a flame retardant system. These areas would need to receive an upgraded finish in Pyroshield to ensure compliance to the Fire Regulations.

Further, the lab tests revealed that the main auditorium area was class O and at an acceptable levels,therefore required no upgrade. Dulux Trade Durable Flat Matt was specified for the low level wall areas and Dulux Trade Vinyl Matt for the higher walls and ceiling areas.

The UK Decs Ltd team made a soft start on site 10 weeks before the theatre’s temporary closure, with preparation work being undertaken during the day so as not to interrupt evening performances.

Managing Director Jason Moulton expands on this: “Once we had full access to the auditorium, the high level work was completed first to minimise the cost of plant equipment hire.

“The ceilings, which reach up to 45m, were accessed using a ‘Spider’, a specialist cherry picker that is small enough to be driven through a single door and stabilised on its ‘spider’ legs. We also constructed a platform from the stage to get it into the auditorium.

“Once the ceiling had been painted, we supported the specialist artist who needed to work at height safely and complete the intricate detailing by painting cloud effects on the ceiling.”

Lower level work including the remaining walls and stairwells were completed subsequently and now feature Dulux Trade Pyroshield, whilst the metal balustrades were stripped back and Dulux Trade Satinwood applied to any previously painted timber surfaces.

Explaining why Dulux Trade was specified, Jason Moulton said: “We worked previously with the Foster Wilson Architects at Hammersmith Apollo where the paint specification was Dulux Trade. The architect was very pleased with the finished result.

“I have worked with Dulux Trade all my career and at UK Decs Ltd ever since the company started trading six years ago. The Dulux Trade team always offers support throughout projects where necessary – especially if there are challenges to overcome.

“For this project, our Technical Support Manager Craig Wilson, arranged for paint colour samples, to enable test areas to be completed. All the necessary codes from the architect’s colour scheme were supplied to the site for approval.

Paul Fleming, Commercial Services Manager, says: “Dulux Trade is proud to have played our part in bringing this superb theatre back to the look and feel of its heyday. This demonstrates the power of colour to transform spaces and the expertise of the Dulux Trade team was on hand throughout to ensure that this intricate and high profile project was finished with brilliance.”

Work is now complete and the theatre open. 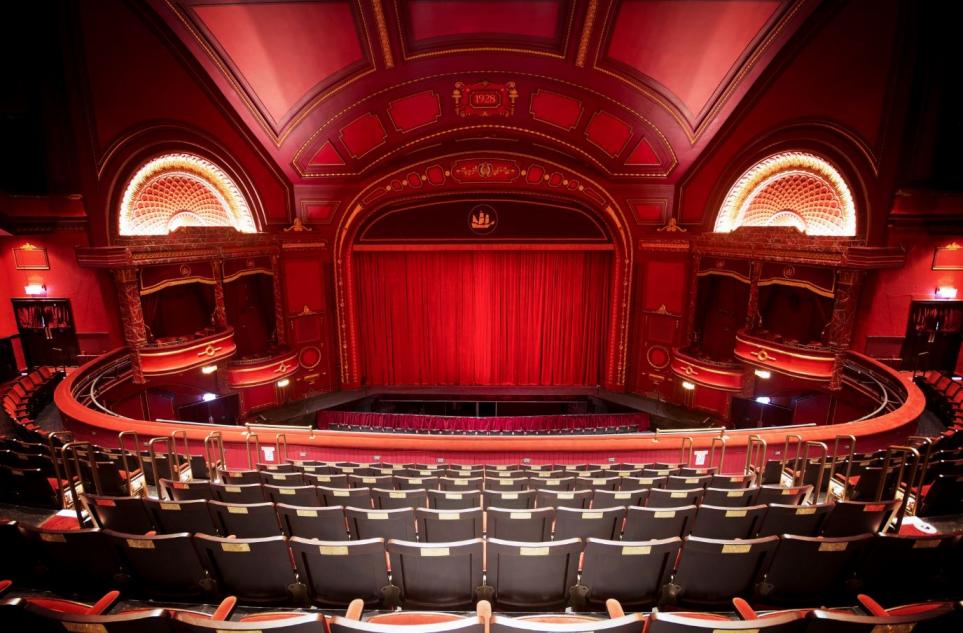